How to Jailbreak and Unlock Your iPhone 4 Using PwnageTool Tutorial for Mac 4.3.2

This is a Tutorial for jailbreaking the iPhone 4 on or for iOS 4.3.2 using PwnageTool for Mac OSX
and for those who still have the 01.59.00  baseband you will preserve your baseband for an unlock with ultrasn0w. Ultrasn0w unlock tutorial can be found here

This tutorial can be used for all devices compatible with pwnagetool 4.3.2 however each device requires a deferent size partition, for device specific tutorials please look here

Step 1
Make a folder on your desktop called Pwnage , this is where you will place all of the files you will need to jailbreak your iPhone. Now download Pwnagetool 4.3.2 from here 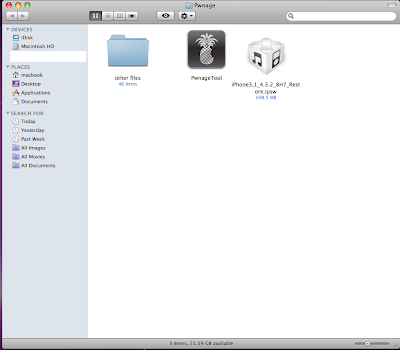 
Step 2
Click Twice on the downloaded Pwnagetool file, and drag the icon into the Pwnage folder

Drag and Drop the PwnageTool 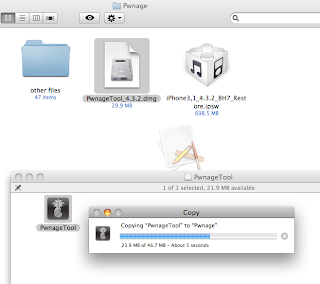 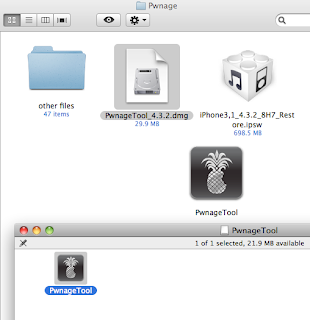 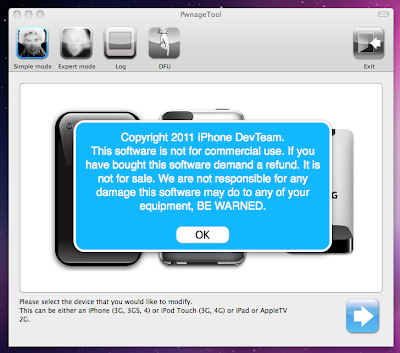 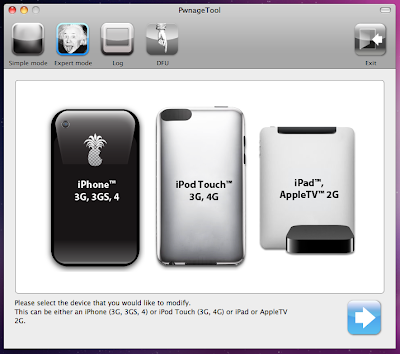 Step 4
Select your Device (in this tutorial the iPhone 4) you will then see a check mark appear then click the blue arrow. 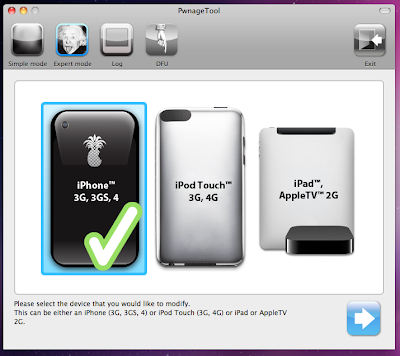 Step 5
Now you have to select the Correct iPSW file for your device, click the Browse for ipsw... 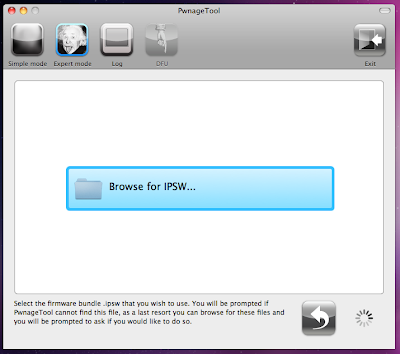 Now find the firmware file for your device and click open 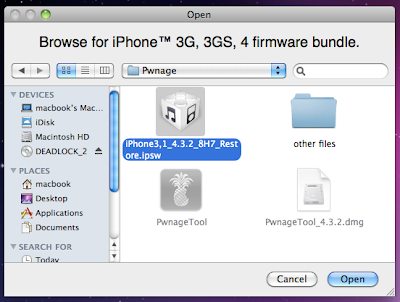 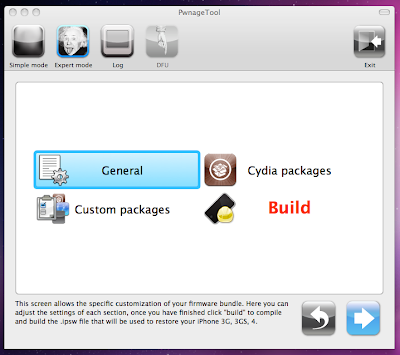 In General Settings you will be able to chose the size of your partition and or whether you need to activate the iPhone or not(Only check Activate if you will not be using an official carrier, for example at&t in the USA ) and click the blue arrow. 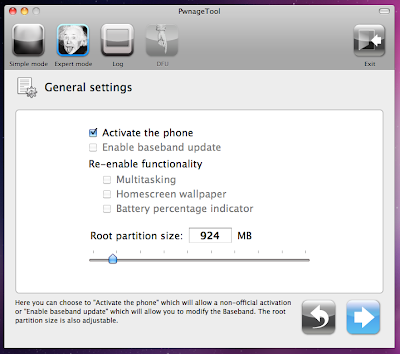 Now you will be in the Cydia settings page, here you will be able to download and include any packages into the custom ipsw... 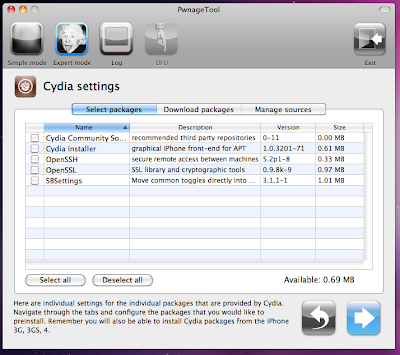 ***NOTE DON'T SELECT CYDIA INSTALLER OR YOUR CYDIA MAY CRASH RANDOMLY, YOU CAN SELECT IT IN THE NEXT WINDOW... 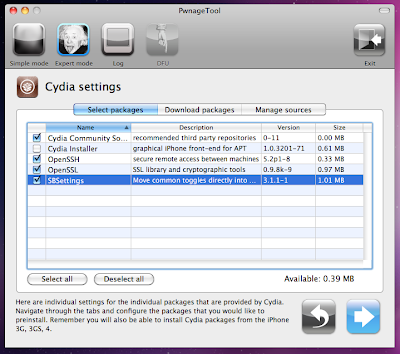 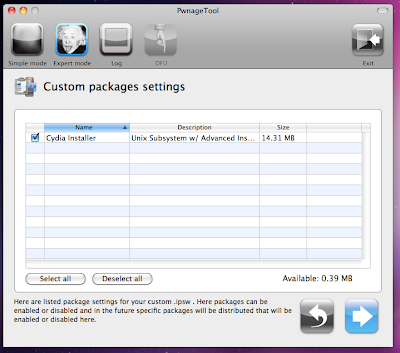 Step 7
Now you are almost done, you will be back at the main menu.
Now select Build, when you see a green check next to build then click the blue arrow 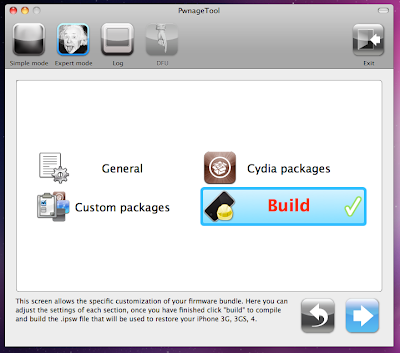 Step 8
Now you can save the custom ipsw file, place it into the Pwnage folder. 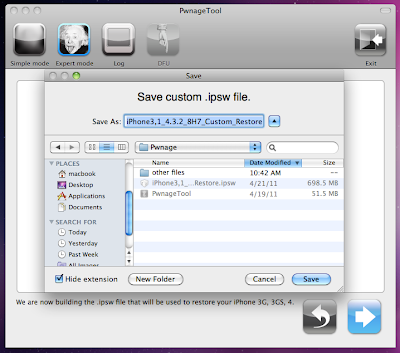 Now you will see this screen, it means that pwnageTool is building your custom ipsw file so that you can update your iPhone, jailbreak it, and add the custom packages you selected all at the same time. ***Note this is a full restore, meaning that all of your data that wasn't properly backed up in itunes will be lost for ever! please sync your iPhone to itunes before you restore your iPhone with this tutorial...

Building the ipsw file may take anywhere from 3mins to 10mins please be patient..

Step 9
When PwnageTool is done building your custom ipsw file you will be asked to connect your iphone and   follow the step to place it into dfu mode
Follow the steps bellow! 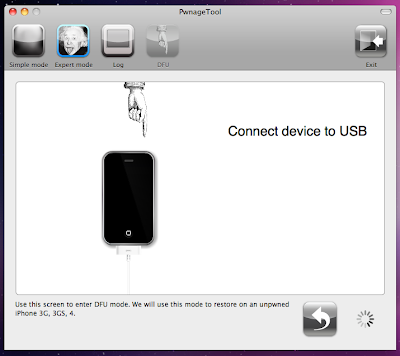 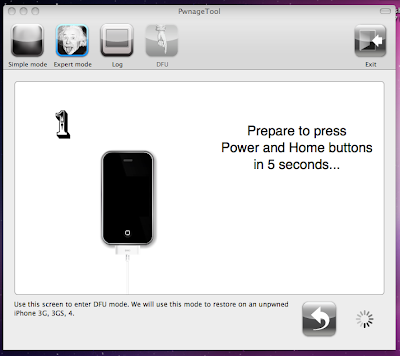 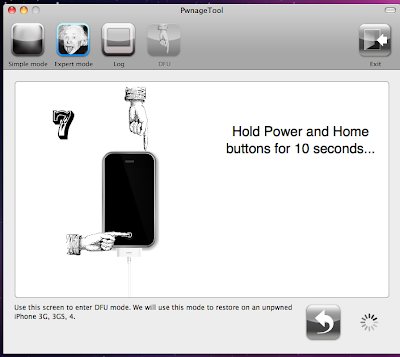 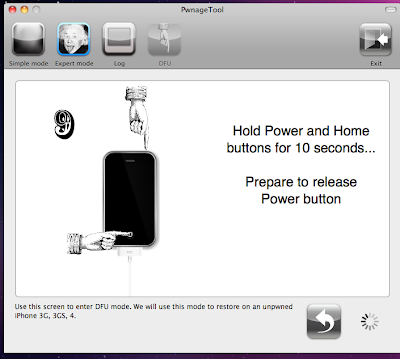 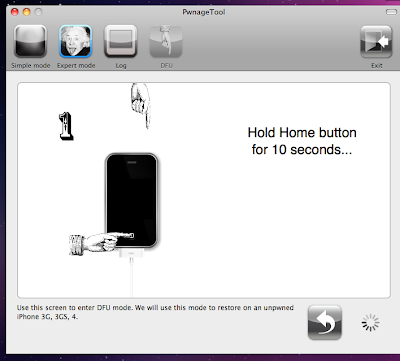 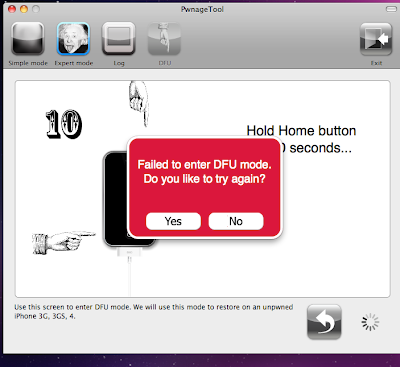 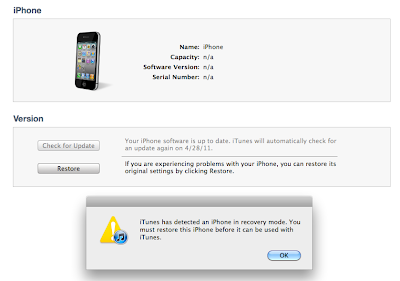 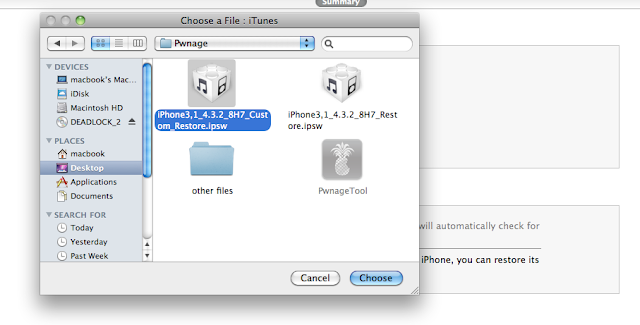 Step 12
Now iTunes will restore, and jailbreak your iPhone, this may take up to 10 minutes.
When iTunes is done your iPhone will start up on its own with firmware 4.3.2 jailbroken and your baseband preserved for those who want to unlock.


**Thank You to the iPhone Dev-Team, I0nic and all involved in the creation of this jailbreaking tool.

Our new Forum is now open here or on the top tabs marks Forums, please register and post.. For the latest limera1n, rubyra1n, and all tech stories, follow us on Twitter at @iphonepixelpost or @limerain_com www.iPodSets.com - Posted using my iPhone 4
Posted by Unknown at 10:51 AM No comments: A finding earlier this month by OSXDaily has generated some speculation about Apple's plans for "Retina" display Macs. The Mac OS X Lion Developer Preview 2 released in late March included an ultra-high resolution version of the background desktop image at a resolution of 3200x2000. A few observers noted that this is higher than any Apple display has ever supported, generating speculation that Apple is preparing for "Retina" display Macs in the near future.

Some people reported that Mac OS X Lion has made some under-the-hood changes opening the door to such super-high resolution displays.

Taking cues from iOS, Apple has reportedly built in support for what it calls "HiDPI display modes". These HiDPI modes allow developers to supply 2x-enlarged images to support double-high resolution displays. Like the iPhone 4's Retina Display, this means that user interface elements will remain the same size, but everything will be twice the resolution and therefore twice as detailed.

Now, MacMagazine.com.br has found that Apple is already starting to include other super high resolution artwork in Lion. They found several icons stored as 1024x1024 sizes, up from a previous maximum of 512x512. Of course, this support for super high resolution displays is only the first step, but suggests Apple is planning ahead when the hardware becomes available.

Posted by Unknown at 9:06 AM No comments:

Apple fighting off supply problems with $11B purchase commitments

Timothy Cook, Apple’s chief of operations and a temporary Steve Jobs replacement, called iPad “the mother of all backlogs” in a recent conference call with Wall Street analysts. He was defending sales of just 4.69 million iPads during fiscal 2011 second quarter, which is below the 6-7 million consensus and the 7.33 million units shipped during the December quarter, even though the new iPad 2 was only on sale during the quarter’s last two weeks. Low iPad numbers are blamed on supply and production issues amid the iPad 2 manufacturing ramp up. How’s Apple going to fix those problems?

According to their 10-Q filing with the US Securities and Exchange Commission, the company will spend an astounding $11 billion dollars on components in the March quarter, a notable increase over the $7.9 billion in purchase commitments from the December quarter. What’s Apple going to buy with all that cash?


It is no secret Apple’s using its vast cash hoard to block out competitors. Component purchases usually cover Apple’s needs for up to five months ahead. Long-term supply deals, the filing reveals, are worth about $2 billion and come on top of the secret $3.9 billion long-term deal for components. Now, conventional wisdom has it that the 39 percent sequential increase in purchase commitments might signal greater quantities of iPads and iPhones. However, with the rumors of iPhone 5 scheduled for a Fall or end of year release, it’s more likely that Apple is securing components to build more iPad 2s as demand and supply are not in balance yet.

Apple will this week bring iPad 2 to thirteen new countries, with more to follow in the coming weeks. Their business in the Asia-Pacific region grew 151 percent to one quarter of total quarterly revenue. With China being Apple’s next success story, maybe they’re gearing up for the 1.4 billion market? We also know Apple’s North Carolina facility is due to become operational this Spring so maybe the increase is somehow related to Apple’s super datacenter or a rumored storage purchase?

Asymco’s Horace Dediu projected a 65 percent revenue growth for the March quarter (versus Apple’s 47 percent guidance) based on sales of 14.7 million iPhones and 9.8 million iPads. He justified a 200 percent annual increase in iPad shipments on belief that “the ramp for the iPad 2 may get sorted out”. Dediu also thinks a part of Apple’s $6.2 billion increase in cash reserves will go towards capital expenditures such as new manufacturing plants (Brazil, anyone).

When challenged on a conference call to shed more light on iPad 2 shipments, Cook said this:

I can tell you that I’m extremely pleased with the progress of the manufacturing ramp And so I’m very confident that we can produce a very large number of iPads for the quarter.
While saying Apple does not anticipate any material impact to their component supply or cost in the March quarter, Cook cautioned everyone that “the situation remains unpredictable”. Steve Jobs was also quoted in Apple’s earnings release as saying that “we will continue to innovate on all fronts throughout the remainder of the year”, which indicates a number of product refreshes requiring component purchases.

Posted by Unknown at 6:16 AM No comments:

South Korea and others going to probe Apple over LocationGate? As I’m sure you know, the iPhone location harvesting issue kinda blew up last week. The latest development in this ongoing story includes a possible investigation by the South Korea government which suspects that the collection of longitude and latitude data without users’ consent could breach the country’s privacy laws, reports Bloomberg:

The Korea Communications Commission asked Apple how often information is collected and saved, and whether users have a choice over whether it is saved or deleted, the commission said in an e-mailed statement today. Apple must explain why such data is saved on devices and if it’s stored on the company’s servers.
French, German and Italian privacy regulators are also keen to investigate the issue, the publication reported. Nobody knows why exactly iOS is amassing location information, but disabling iOS location services does nothing to stop your iPhone or 3G iPad from tracking your location . Although the researchers who discovered this stress that neither iOS nor iTunes appear to upload this database to Apple’s servers, the issue is threatening to snowball into a privacy nightmare while earning Apple bad press.


Locationgate, as some have called it, predictably had privacy advocates cry foul. Senators Al Franken and Ed Markey even wrote a strongly-worded letter to Apple’s chief Steve Jobs, seeking explanation.

On the other hand, some pundits claim it’s a harmless bug and point out that Android handsets phone home every couple of minutes, sending location information and other device stats.

Meanwhile, anyone can download a Mac app that plots their amassed location data on a world map or use a tool to stop jailbroken iPhones from storing longitude and latitude information.

Posted by Unknown at 3:08 AM No comments: